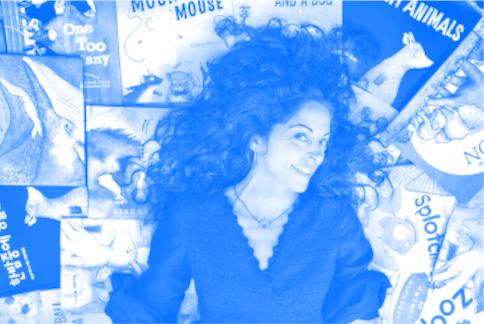 Gianna Marino was born in San Francisco and spent her early years galloping horses through Golden Gate Park. Her explorations expanded after graduating from high school and in order to afford her many journeys, Gianna had several jobs at once: apprenticing a muralist, a jewelry designer, a product designer and driving horse carriages through the park. She explored many corners of the world, from Africa, Asia, and Latin America, to the South Pacific, Europe, and as crew on sailboats in the high seas.

Gianna finally landed a full-time freelance gig designing toys for children, but after several years in a corporate box with no windows, she left for good and began painting, illustrating and writing books for children.

Gianna has written over a dozen award-winning books, including Meet Me at the Moon, Too Tall Houses, Following Papa’s Song, Night Animals, Night Animals Need Sleep Too, If I Had a Horse and she is the New York Times best-selling illustrator of Don’t Let Them Disappear, written by Chelsea Clinton.

Though she still wanders the world, Gianna now lives in Northern California and works full-time writing and illustrating.

When wildfires consume their forest home, the animals must flee–but as the flames subside, they return and look to new beginnings …

At first, they didn’t notice the spark flying above the dry treetops.

But then the smoke blew from the north, and the flames began to grow. . .

This story of recovery and resilience will comfort young readers concerned about forest fires, reassuring them that in time new growth will sprout and, like the wildlife in the story, we can rebuild.

Lush watercolor illustrations explore the bittersweet cycle of burning and rebirth in the forest, following a lone deer as it sees its only home scorched by flame–and later, returns to find new plants already sprouting, the promise of a day when the air will be filled with birdsong once again.

As a Northern California resident, Gianna Marino witnessed the 2017 Sonoma wildfire firsthand when it came within inches of destroying her property. Her personal experience is palpably reflected through her portrayal of dignified animal silhouettes and stark, ashen landscapes in the wake of the flames. The book closes with an essay describing her encounter with the wildfire. Accessible information on wildfires, including a list of recommendations for further reading, is also included.

Fans of Chelsea Clinton’s Don’t Let Them Disappear will recognize Gianna’s distinctive, beautiful art and appreciate the hopeful ecological message of We Will Live in This Forest Again. Parents and children with a soft spot for the fragile ecology of the forest will connect immediately with this book, and gain appreciation for what it takes to protect the natural world.